All the way from MIT 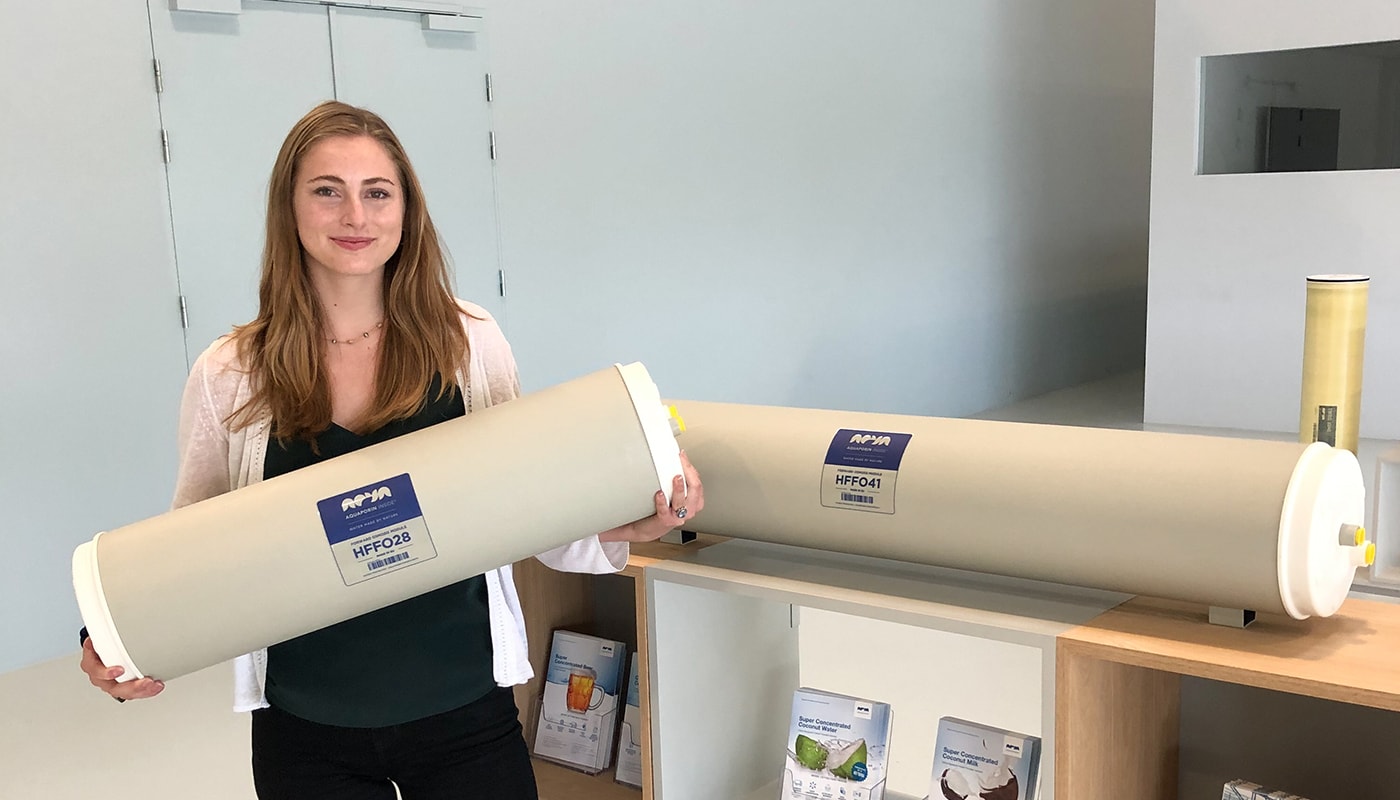 Aquaporin Academy student, Eveline Mayner, has just finished her internship. Eveline has been with Aquaporin over the summer assisting in the development of our larger industrial-sized Hollow Fiber Forward Osmosis products HFFO28 and HFFO41.

Eveline was one of the first students of the joint Aquaporin and MIT-DENMARK program, which is a platform facilitating collaboration between Aquaporin A/S and Massachusetts Institute of Technology.

Here is what Eveline remembers about her experience at Aquaporin:

"One of my roles was to evaluate the second version of the Hollow Fiber Forward Osmosis (HFFO) 14 module well as the new modules with increased surface areas: HFFO28 an HFFO41. The larger modules were meant to have increased capacity, so higher permeation.  The overall aim of my analysis was to determine what conditions the modules could be used at without harming the membranes and any mechanical weaknesses that would prevent us from scaling up. I recorded the membranes performance at varying flows and recorded mechanical features, primarily pressure and how it changed as flow increased. The modules were analyzed using the Arla Pilot with a feed of RO water and a half molar sodium chloride draw solution. Pressure at the inlet and outlets of draw and feed were monitored and the temperature was recorded. Throughout the tests, to determine the reverse salt flux, a conductivity meter was used at the feed outlet. We based the performance of the modules on the standard quality control criteria. I also monitored the modules for leaking. The main conclusion of my project was determining the features that needed to be redesigned for the next version of the forward osmosis modules. An adaptor and new end cap were designed to improve the quality of the modules and allow for improved assembly. These modules will be the largest forward osmosis membranes in industry.

I also worked to determine the source of a pH decline in our system which occurred during long term high pH exposure tests. I ran various experiments and found that it the decline was not due to the leaching of any material in our modules but rather because carbon dioxide from the air dissolves in the high pH solutions and becomes carbonic acid which causes the pH to decline.

The highlight of my internship was the level of autonomy I had. Because I had often been set about to complete tasks on my own, I felt comfortable that I could use the resources of the lab. I enjoyed that I was able to formulate my own investigation.

One difference in working culture that I noticed was there is a much heavier emphasis on life outside of work in Denmark. Our company lunches are not spent discussing work and people often fit their schedule around their homelife. For example, people arrived in a range 6 to 9 AM and left from 2 to 5. I think people were also more comfortable with a calmer pace to some extent. I think that my environment at home and in university stressed working as hard as you can, doing extra hours and always sacrificing connections with other people for a better end result. I think this is a valuable lesson for me because I don’t want to spend any free time that I have for the rest of my life worrying that I could be working harder. We can learn from the higher rates of happiness and life quality in Denmark. It would be very beneficial to see a Danish company in the fall or winter so that I could analyze the pace of a career in Denmark when work life is at its peak. 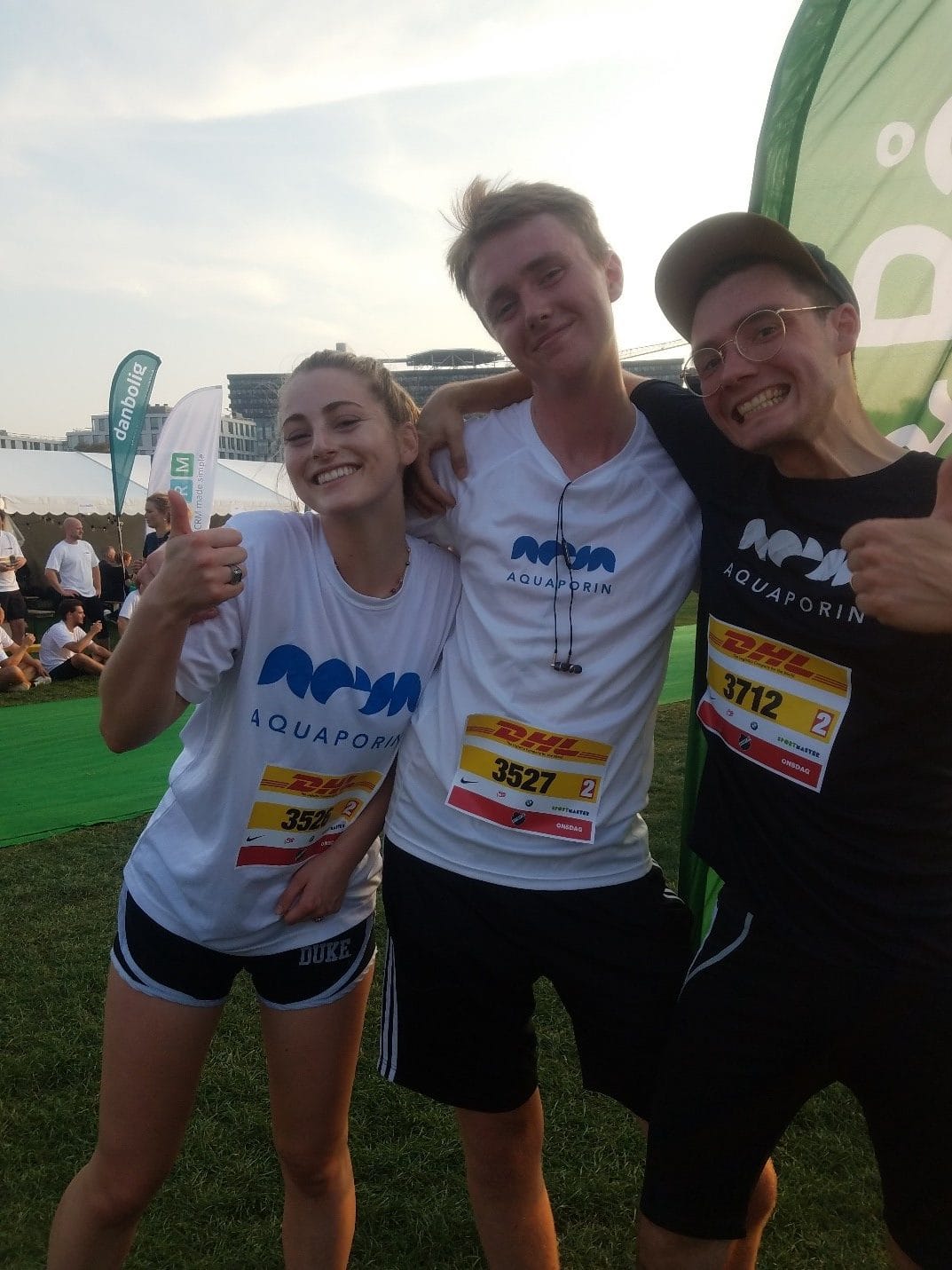 I was surprised by how easy I found it to make genuine connections with people. I came into the program believing that it would be relatively difficult for me to make Danish friends because the common cultural perception of Danes is that they are kind but difficult to connect with. This perception was reinforced by our training sessions and I came in with small dread of lonely three months in the back of my mind; however, I was pleasantly surprised by how easy I found it to be to make connections with people. I think that one key was putting yourself in situations where conversation was inevitable. For me I felt like it was easy to integrate into Danish culture by joining organizations and/or living with Danish students. Danes are not particularly outgoing or randomly friendly in daily life, but if you are involved in a project or residence with them then I have found that they are extremely inclusive.

Throughout my stay, in work and in social settings, I found most people to be quite candid. In most cases, I did not have to guess what was expected of me and that made me feel comfortable to join in activities to which I was invited. In the same vein, I particularly enjoyed Danish conversational culture. I didn’t feel like people felt the need to fill silence which I thought was really pleasant. In my shared kitchen or during lunch there was often lulls where no one had anything particular to say and I thought it was nice that there wasn’t any need to fill it with small talk. It was a comfortable quiet which gave me time to think and relax.  I think that the generational separations, perceived or legitimate, are less prominent in Denmark. For example, at work it was difficult for me to determine the age of many of my coworkers because the interactions between the interns and the heads of departments were the same: talking about running, biking, embarrassing stories, or plans for the weekends. I often perceive people working full time with houses, families, and fully developed lives as much more serious and reserved and I was initially comfortable with jovially discussing plans for the weekend only with other interns or student helpers. However, after listening quietly at many company lunches, I perceived that my conversations with friends were the same that I heard here, among any coworkers."

Published on Oct, 2019 in Community
Want to receive news?
Join our newsletter 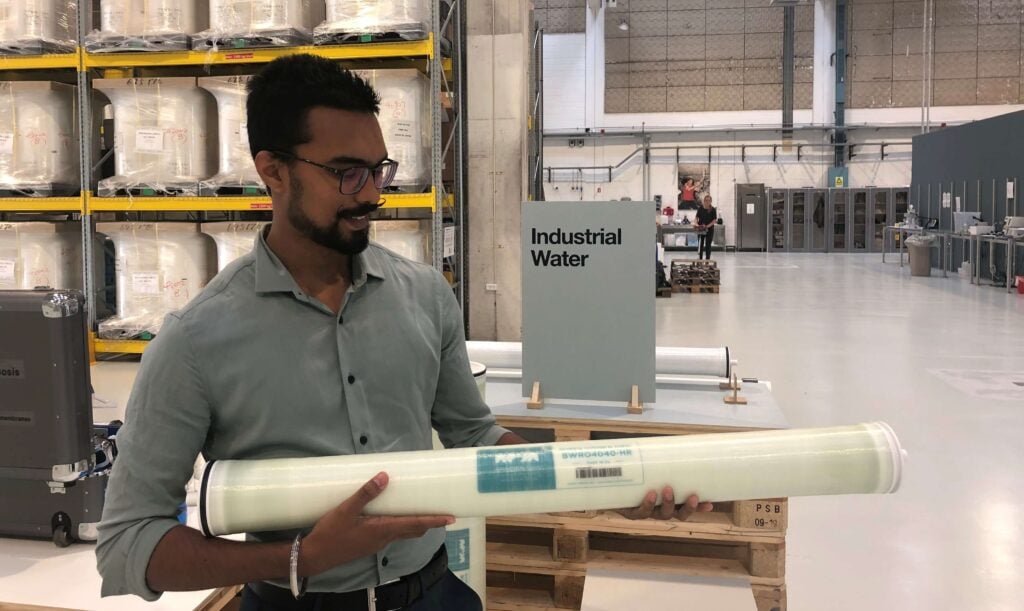 Adarsh Raj graduated as M.Sc. in Business Administration and Bio-entrepreneurship from Copenhagen Business School after finishing his master’s thesis at Aquaporin. The aim of the master’s thesis was to understand Aquaporin’s prototype Brackish Water RO technology in better detail, both in terms of the technical offering and its market potential. Integrating Aquaporin proteins in conventional […]
LEARN MORE

Our students, Emma Christina Ekebjærg and Eva Hvalkof Andersen from The Technical University of Denmark just finalized their Bachelor Thesis Project. In this blog post they explain about the project and how it was being a part of Aquaporin Academy. The background for our bachelor thesis was ESA’s and NASA’s plans to build a Lunar […]
LEARN MORE
1 2 Next »
Start using Aquaporin
Get a quote
About Us
CompanyCareerGarageAcademyASAPrimer
Navigate
BlogSolutionsDrinking waterIndustrial waterContact
Info
PatentsCookie policyPrivacy policyTerms and ConditionsPublic - private partnerships
Products
All productsForward osmosis membranesTap water membranesZERO - water purifierBrackish water RO membranesAquaporin Inside technology
FOllow Us
NewsletterFacebook
TwitterLinkedInYouTube
Aquaporin Denmark
Aquaporin A/S, Nymøllevej 78
DK-2800
Kongens Lyngby